Most certainly the most confidential (by its size, its geographical situation and the typicity of its wines which only “reveal themselves” fully to the most patient of wine enthusiasts) of the ten estates making up Pomerol Séduction, Clos du Clocher has cultivated its discretion and independence over four generations.

Behind this “pocket-sized” vineyard (6 hectares/15 acres), there’s something of a history of Corréziens who, at the dawn of the 20th century, tried their luck on the right bank of the Bordeaux vineyard and eventually contributed great chapters to the story of Pomerol and Saint-Émilion. In this precise case, we are talking about the Audy family.

We have to go back to the 12th century to find the origins of Château Beauregard. At that time, it was in the hands of the Order of Knights of the Hospital of Saint John of Jerusalem, whose time there left some vestiges that we can still admire at the estate today.

Destroyed by a fire in the 18th century, the building was reconstructed by a pupil of Victor Louis, the architect of Bordeaux’s Grand Théâtre: its typical Chartreuse château designed on two floors makes it most definitely unique in Pomerol. The château’s grounds also contribute to the superb cachet of the site.

Château Clinet embodies the contemporary vision of a Pomerol family-run estate. Or the ambition to be a relevant part of our times while conducting a timeless profession. The oldest archives mentioning the presence of vines on the Clinet site date back to 1595, and the existence of the estate probably pre-dates that, which positions this vineyard on a long historical timeline of which the current owners are the custodians..

It was in 1999 that Jean-Louis Laborde bought Château Clinet, with the aim of immediately passing it on to his son Ronan.
Together they worked on bolstering Clinet, the wines of which had already been acclaimed by Robert Parker as being among Pomerol’s elite, and set about getting the vineyard back into shape and injecting substantial investment, including the négociant activity and warehouse building Ronan by Clinet, inaugurated in 2015, and which has become the figurehead of the estate.

When Hervé Laviale and his wife Griet Van Malderen-Laviale took over Château Vieux Maillet in 2004, this ancient Pomerol property only covered one hectare (2.47 acres).

Patiently, the pair set about developing the vineyard, eventually extending it to today’s 8.5 hectares (21 acres) of vines, in which Merlot largely dominates the grape composition, although the proportion of Cabernet Franc is gradually increasing. Benefiting from a patchwork of terroirs essentially made up of gravel and sand, Vieux Maillet has renovated its technical facility to enable individualised vinifications to be made batch by batch.

The history of Château Rouget is an ancient one. Archives date its existence back to at least the beginning of the 18th century. In 1992, the Labruyère family acquired the vineyard, 12 hectares (30 acres of vines) of vines surrounding the château, the surface area having been since enlarged by 6 hectares (nearly 15 acres) close to Trotanoy, La Fleur Pétrus and Le Pin..

For the Labruyère family, established since the 19th century in southern Burgundy, (Domaine Labruyère in Moulin-à-Vent) and since the end of the 1980s in the Cote d’Or (Domaine Jacques Prieur in Meursault), settling on Bordeaux’s right bank was the immediate result of having fallen in love with Pomerol, its landscape and its clay terroirs, which enhance the expression of Merlot like nowhere else on the planet.

Château Nénin is one of the few large châteaux in the heart of the Pomerol appellation. It has an ancient history, as testify the Maltese crosses found on walls in the oldest parts of the property.

The estate was in the hands of the Despujols family from 1847, before being bought in 1997 by Jean-Hubert Delon, a discreet aesthete and great wine enthusiast. Representing one of the oldest wine families in the Bordeaux region, running since the 19th century renowned growths such as Château Léoville-Las-Cases (the Saint- Julien classified growth), Jean-Hubert Delon is supported by Pierre Graffeuille, the general manager of Domaines Delon, together with the new technical manager, Romain Courtier.

Those who have had the chance to meet Alain Moueix know that his wines resemble the man. At Château Mazeyres just as at Fonroque (a Grand Cru Classé in Saint-Émilion), he vinifies wines that tend more towards restraint, length on the palate and elegance rather than power and exuberance.

The Mazeyres terroirs lend themselves well to this profile of wine. The third largest estate in Pomerol covering some 25.5 hectares (63 acres), Mazeyres stretches over three distinct types of terroir to the west and to the south of the appellation: fine gravel with a little clay, giving fine, linear wines; then sand and clay in the south, which offer wines that are fleshy and round; and at the bottom of the plateau, the clay soils bring more tight-knit and tannic wines. Making up 73% of this patchwork is the Merlot grape, along with a growing proportion of Cabernet Franc, as well as some Petit Verdot bringing its own individual stamp (even in a small quantity). Alain Moueix has made Château Mazeyres a Pomerol estate to be closely watched.

Watch out! A renaissance is in progress. That old notion of a Bordeaux “sleeping beauty” Eric Monneret even jokes about himself. It has been used so often that we hesitate in bringing it out yet another time. However, at Château La Pointe, it would be far from inappropriate.

Since the time it was bought at the end of 2007 by the Generali France insurance group and a new general manager in the shape of Eric
Monneret was put in place, this vineyard, that has historically figured among the largest in Pomerol (going from 22 hectares/54 acres in the 19th century to 23/57 in one single block today), has begun a phase of renewal which has started to bear fruit.

Year after year, the excellent reputation that the wines of Château La Conseillante enjoy with wine lovers all around the world never stops growing. One of the star properties of the Pomerol appellation, La Conseillante’s history dates back over 300 years.

The estate was then in the hands of Catherine Conseillan, who had inherited the vineyard from her father who had given it the shape we know today with 12 hectares (30 acres) of vines superbly located on the Pomerol plateau. It was on her death that her children decided, in her honour, to rename the Château “La Conseillante”.

This is the family-run wine estate par excellence. Château Gazin was purchased in1918 by Louis Soualle (the descendants of whom are still at the helm a century later) and is an emblematic Pomerol estate.

The fourth generation (the fifth are already raring to go) is represented by Nicolas de Bailliencourt, who has managed the estate since1990 with his brother Christophe and his two sisters Inès and Laure. Located on the Pomerol plateau, Château Gazin lies on superb very clay terroir where the Merlot grape performs majestically, making up 90% of the vineyard’s grape composition along with 3% Cabernet Franc and 7% Cabernet Sauvignon that benefit from the nearby crown of gravel that runs around the plateau.

The vineyard covers a surface area of 24 hectares (almost 60 acres).

Ten estates. Ten vintages. Men and women deeply attached to their land, their vines and their wines. Men and women seeking, every year, every day, to bring out in their wines the best that nature places in their hands with, as their common thread, the ambition to reveal all the richness and diversity of their terroirs.

That is Pomerol Séduction. A snapshot of a mosaic of expressions that make up Pomerol. A team of ambassadors proudly bearing the standard of an appellation figuring among the most admired and yet the most secret of Bordeaux. A sample of properties on a human scale, very often family-run, always led by personalities with passionate commitment, who sought in 2006 to create an association of which the whole was greater than the sum of its parts.
Behind this collective adventure, there are ten different stories, ten trajectories, ten memories, but one sole desire: to make people love Pomerol. To look back on how far they have come together, to turn towards the future with confidence and share what has given them their uniqueness, the ten members of Pomerol Séduction wished to offer an outstanding case on their tenth anniversary of being together.
2016. Could this tenth vintage have had a more beautiful incarnation? In every way remarkable, with outstanding balance and promising great ageing capacity, 2016 offers a superb entrance through which to discover and appreciate the greatness of Pomerol. In our 10 Châteaux, ten interpretations, ten facets of this historic vintage are offered to-day in a limited edition prestige case, made in France. Only 100 of them are available for sale, each of them numbered and accompanied by a guarantee of authenticity signed by the representatives of the ten estates. A collector’s item, an object to be handed down, which captures and exalts the spirit of Pomerol Séduction.

Discover this spirit, that’s our invitation to you.

In a limited edition of 100 luxury wine chests, this tenth vintage case is the expression of a unitedness within the group. With its secret opening, it’s a snapshot of Pomerol Seduction's wines in an outstanding vintage in which no-one could fail to succeed.
Almost like a colour chart which the taster can dip into according to his whim, it displays the palette of Pomerols in a very coherent and precise way. This case is above all a wonderful way of summing up Pomerol Seduction members philosophy as a group – all of them are different but everyone together.

Designed and made in France by ADAM with tradition and innovation / Registered design®. 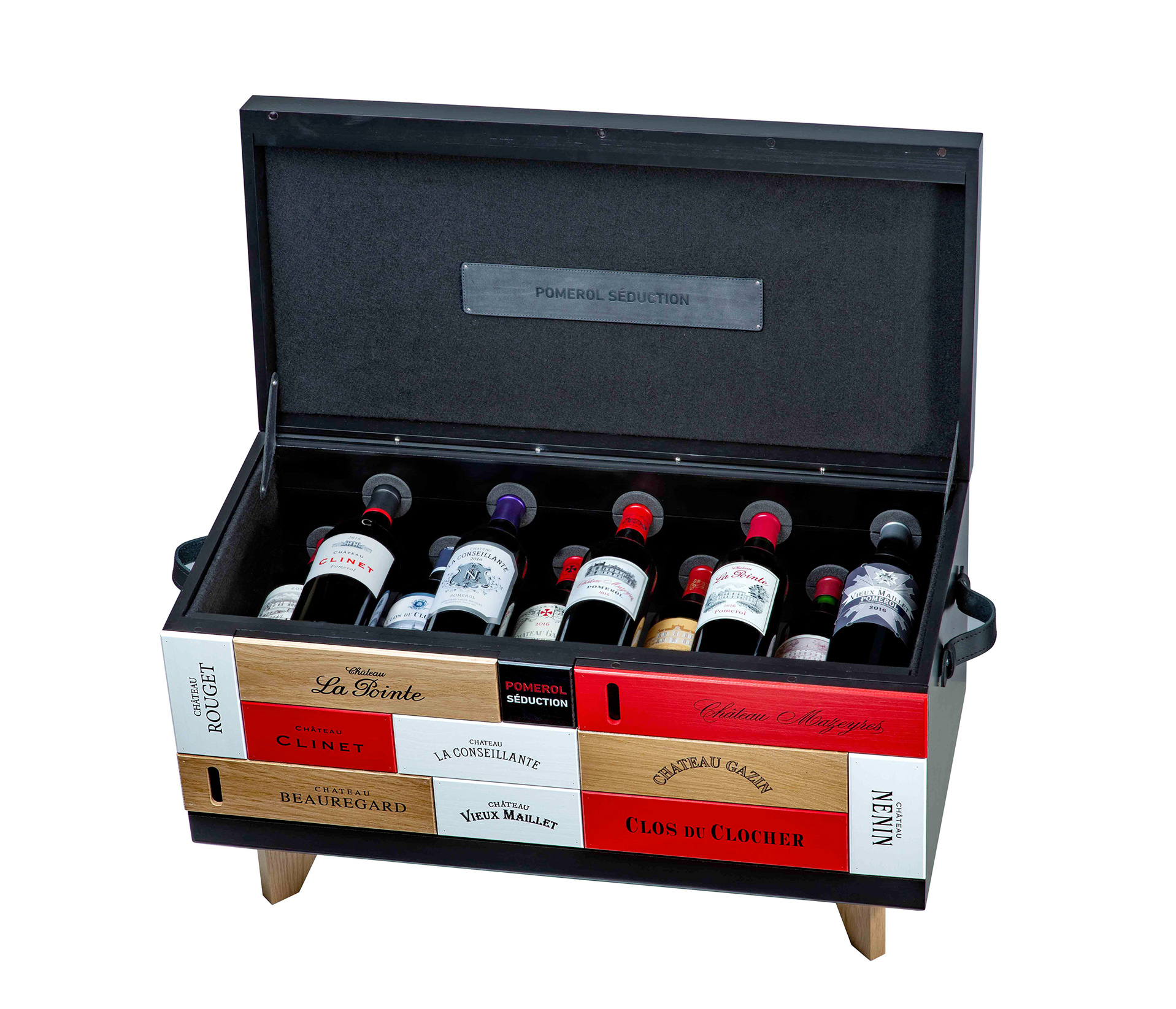 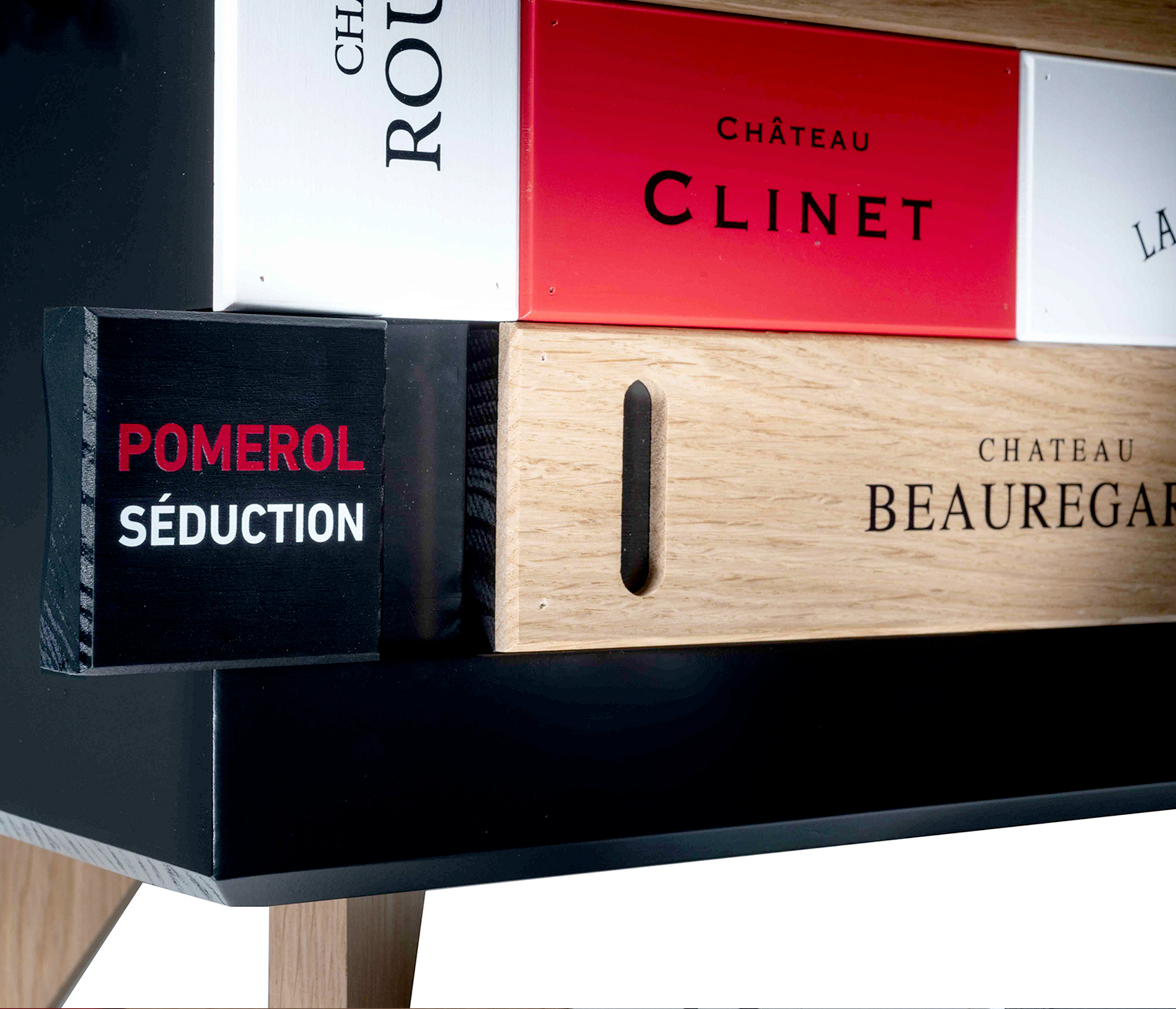 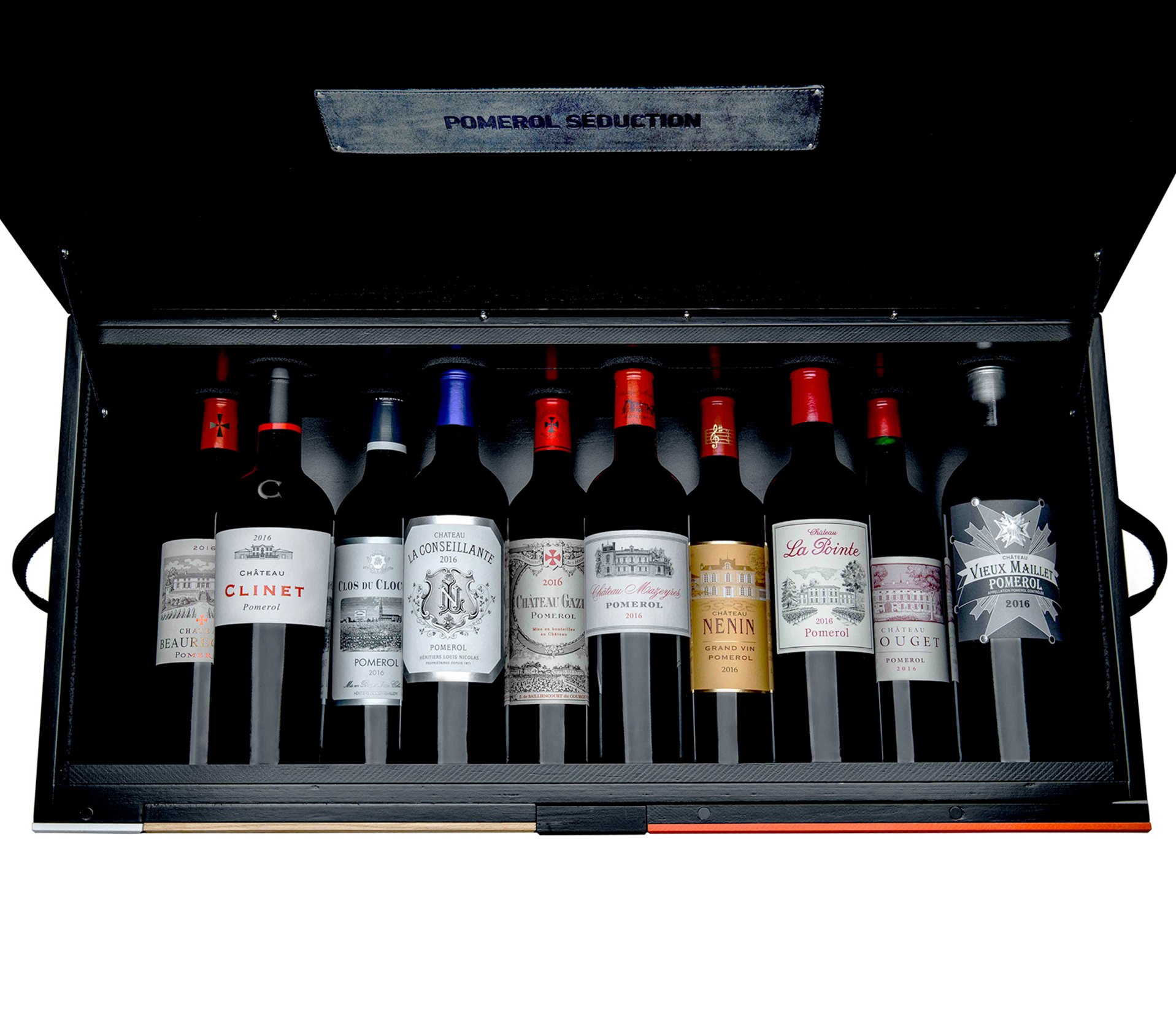 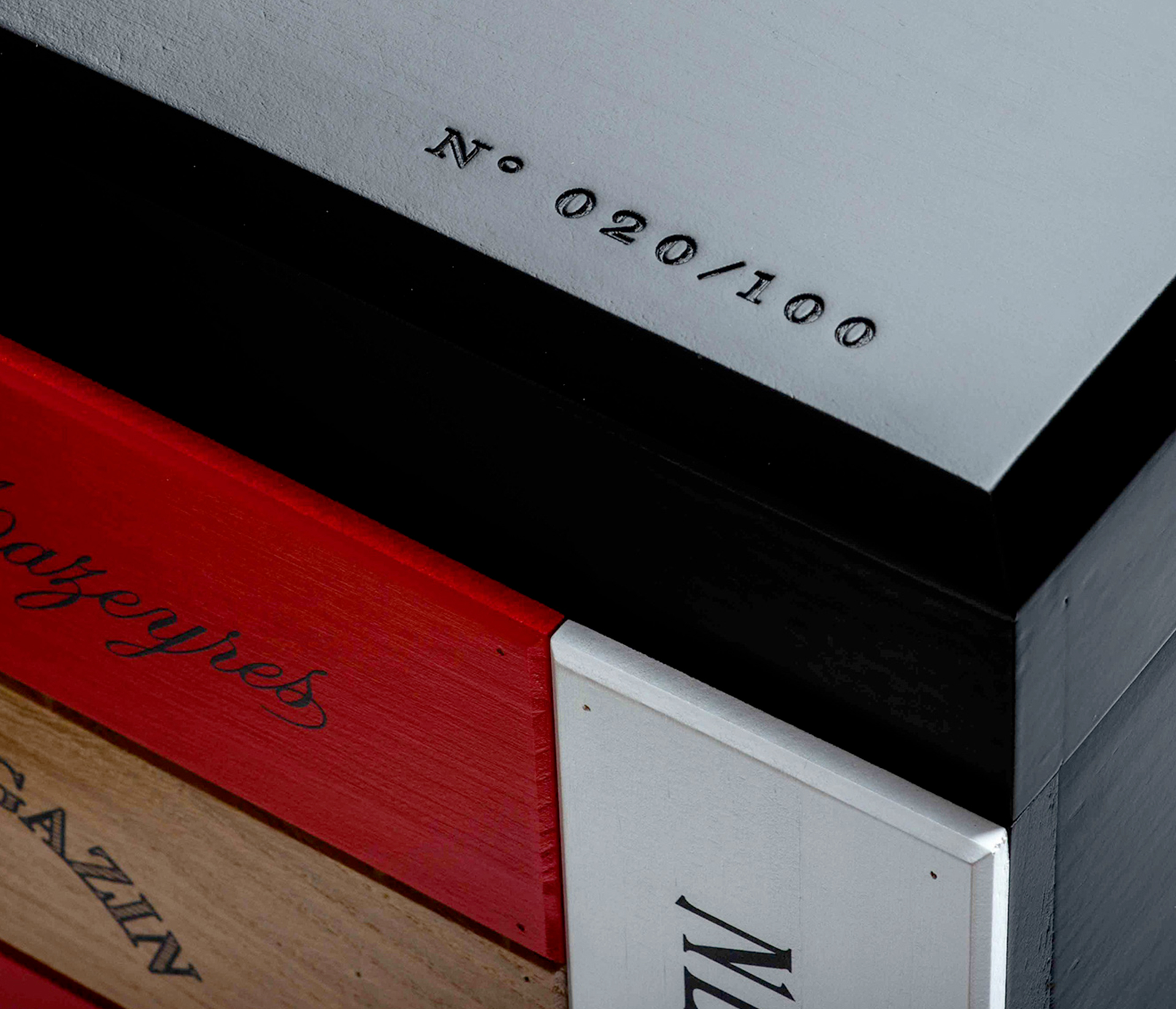 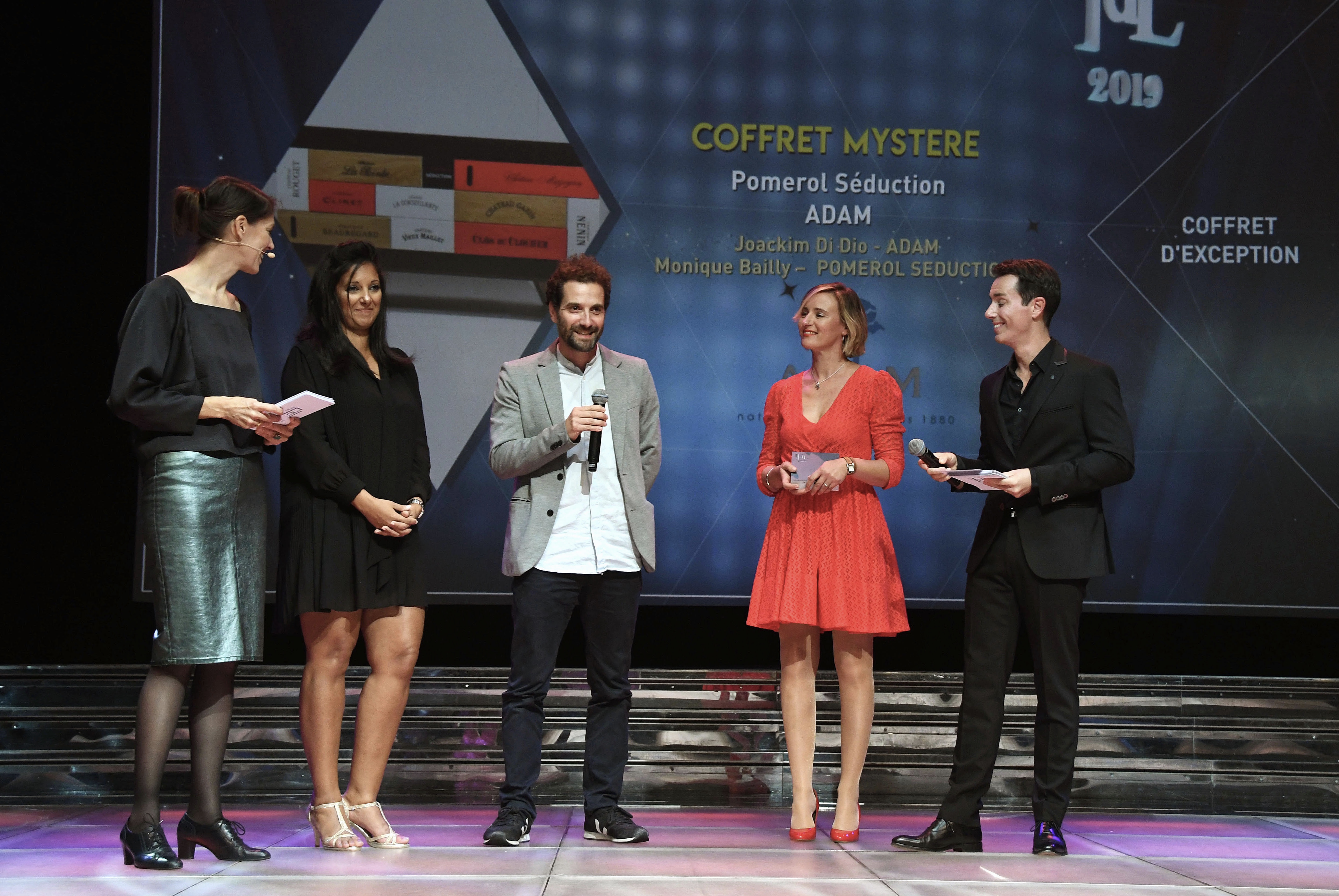 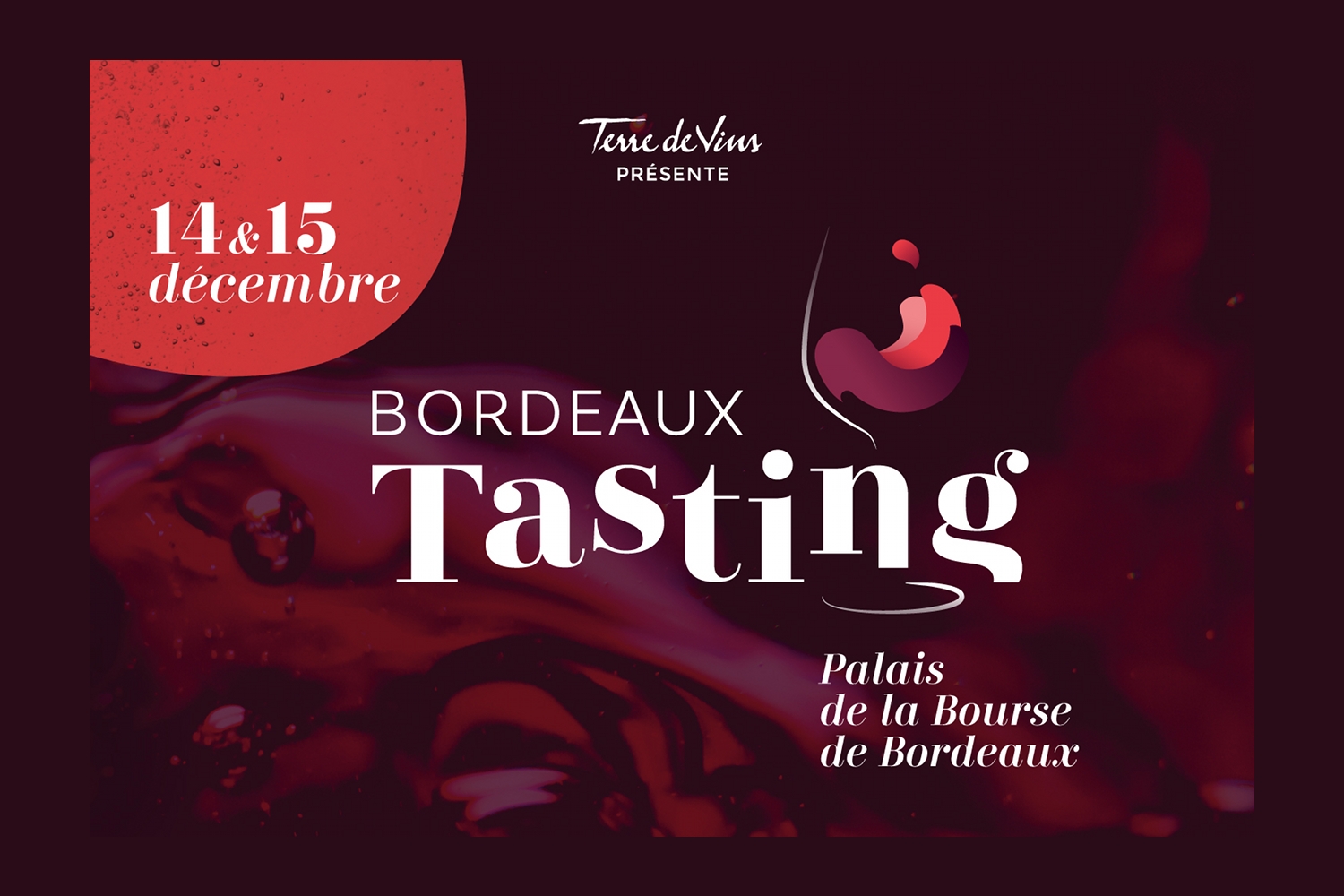 Join us soon at Bordeaux Tasting 2019